Online lectures, held by foreign and Kazakhstani scientists within the framework of the educational fund “Eurasia Foundation (from Asia)”

Since the beginning of the second semester of the 2020-2021 academic year, an elective course “One Asia - One World” has been held at the Faculty of International Relations within the framework of the educational grant by the Japanese fund “Eurasia Foundation”.

Rector of the University, an Academician of the National Academy of Sciences of the Republic of Kazakhstan Kunanbayeva Salima Sagiyevna always recommends the students be introduced to the advanced world education system and follow the concept of the “Community of the United Destiny of Human society”, because the prospects for the development of human society in the XXI century to a decisive extent depend on new knowledge and technologies. Accordingly, the elective course “One Asia - One World” contributes to the formation of students’ intercultural competences and the establishment of dialogue in the multicultural society of Eurasia. As we previously reported, in the past lectures by foreign professors from Japan, Korea, Spain and Finland, the competence models and prospects for the further development of the countries of the Asian community have been discussed. 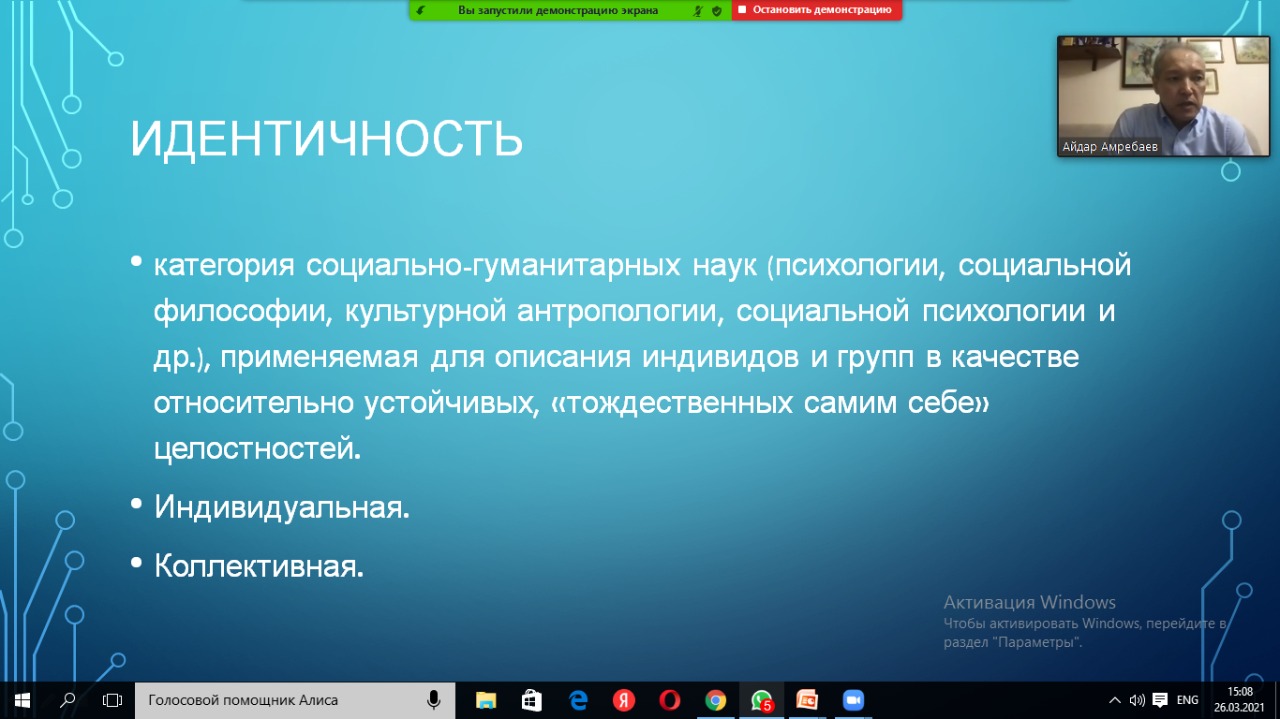 On March 19, 2021, the University hosted an online guest lecture by Professor Xiana Sotelo from the University of Burgos, Spain on the topic “How to overcome racial barriers in intercultural dialogue?”. Dr. Xiana Sotelo received a PhD in Cultural and Literary Studies in English-speaking countries at the Complutense University of Madrid. She teaches courses in Literature and Culture to the United States in Complutense University of Madrid. The main areas of her research are cultural and literary studies in English-speaking countries, gender studies.

In her lecture, Dr. Xiana Sotelo, emphasized that in the 21st century only a tolerant, intellectual and competitive nation can count on success, and this simple truth has become a moral imperative in Eurasia. We see what is happening in the world, what serious risks are accumulating here. Nationalism and religious intolerance become the ideological basis for the most radical groups and movements, and they destroy, undermine states and divide societies, as evidenced by colossal migration flows.

As Dr. Xiana Sotelo says: “The goal of multicultural education is to form a modern person capable of active and effective life in a multicultural environment, possessing a developed understanding of the originality of other cultures, the ability to live in peace and harmony with people of different nationalities, races, and beliefs”. 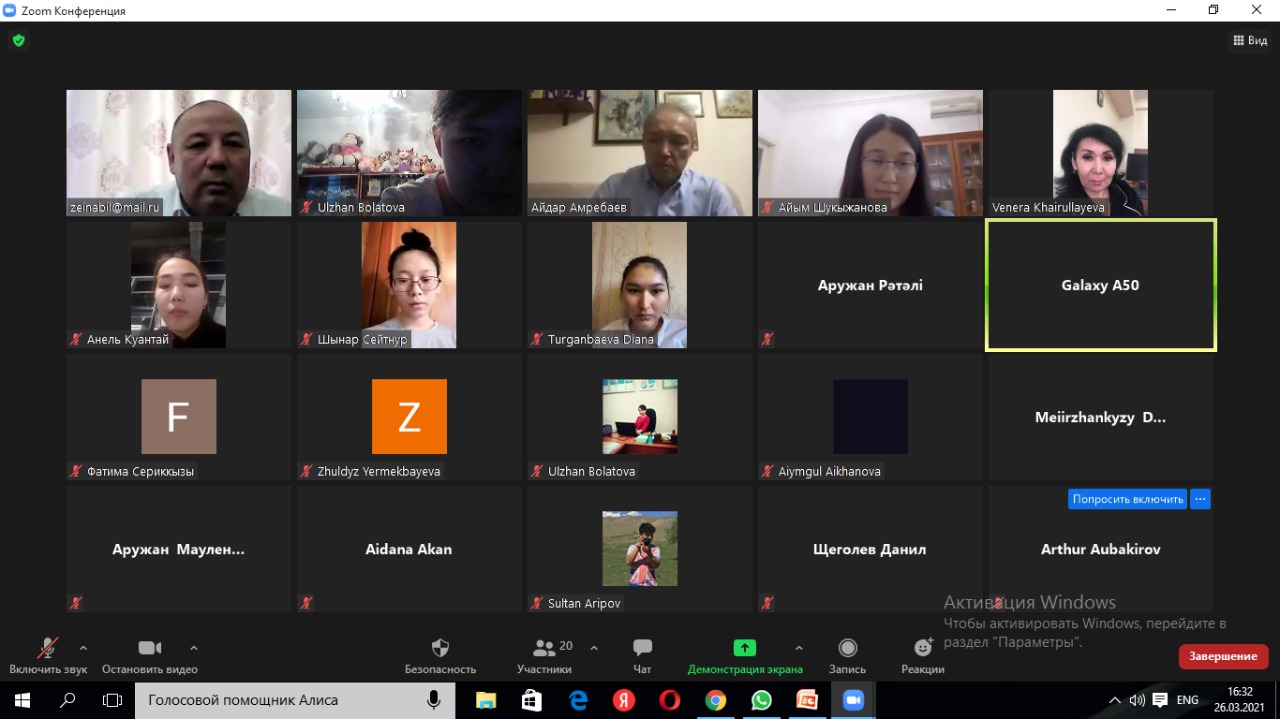 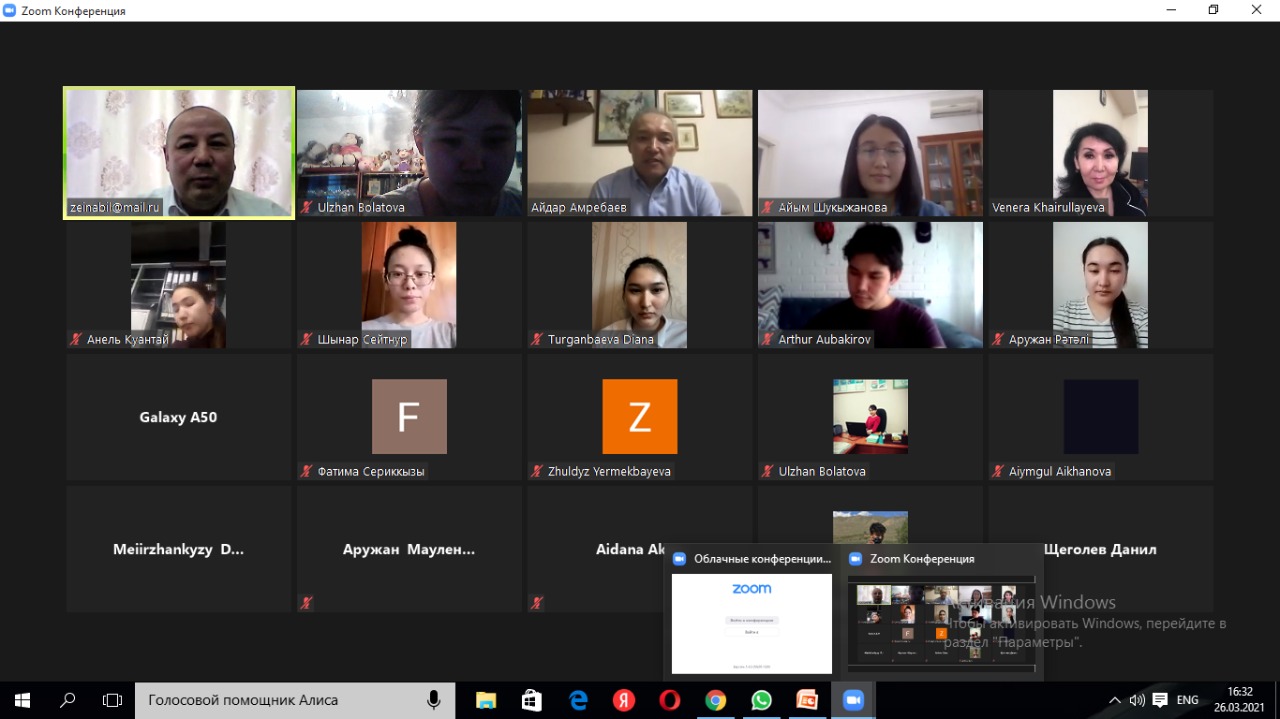 The lecture of Dr. Xiana Sotelo had a logical continuation by the lecture of a well-known Kazakhstani international expert and political scientist Amrebayev Aydar Moldashevich, the CEO of the Center for Political Research of the Institute of Philosophy and Education, MES RK, on the topic: “Asian identity and sovereignty in the transit societies of Asia”. On March 26, the students listened with particular interest to a 2-hour lecture by Amrebayev A.M. During the lecture, the international experience of conducting and implementing the policy of multiculturalism was reviewed. As the lecturer said, the issues of finding an ideological basis for our national structure, a model of sovereign development, a sensitive issue for Kazakhstan as the fate of a nation and a way of its self-preservation remain relevant for Kazakhstan.

There were many interesting questions to the lecturer and at the end of the lecture Professor Amrebayev A.M. said: “The construction of the Kazakh nation provides for the awakening of such important democratic attributes as civic consciousness, patriotism, mastery of the state language and its widespread use, implementation of domestic and foreign policies based on the priority of national interests, protection of national security, including information, reliance on national ideology based on the values ​​and mentality of the Kazakhs, the preservation and enrichment of the national traditions of our people”. In his lecture, Professor Amrebayev A.M. noted the need for close cooperation in Asia, now the world faces a huge interest in Japan and the countries of Southeast and Central Asia, that’s why we should stand up for the successful development of economic, political, cultural relations in the future of the Eurasian continent. Today we need to invest all knowledge, first of all, in the younger generation, in the revival and development of spirituality, culture and traditions, which is a key factor in the formation of our spiritual unity and Kazakhstani identity.